The Benin Monarch, Oba Ewuare II, yesterday placed a curse on perpetrators of human trafficking in Edo state as well as native doctors who administer oath of secrecy on victims, asserting that the gods of Benin Kingdom would destroy those involved in the illicit trade.
The monarch who also invoked his power as the spiritual leader of Benin kingdom nullified all the oaths of secrecy administered on all victims of human trafficking and urged them to speak out and seek assistance.

“Those who traffic people to Italy, Germany and other countries first take them to Libya where they are enslaved. I urge you all to tell those who took the oath of secrecy to speak up, we will protect them. We need to start arresting those involved because this is a crime against God and humanity. It is modern day slavery. From today, we no longer want to hear of human trafficking in Benin. ¨I hope those who have been involved in this illegal trade will stop from today. All native doctors who have administered oath of secrecy on victims of human trafficking should also tell those they administered such oath on to speak out. I am appealing to all native doctors to stop administering such oaths on trafficked victims and all such oaths are hereby nullified.

Saturday Vanguard was informed that the sacrifices made were specially targeted at human traffickers and cultists who were in the habit of killing in the society. Oba Ewuare II was present as all the chiefs priests in the kingdom performed their greetings before carrying out their duties. The event was attended by all the different groups in the palace of the Oba which was a clear indication that the matter was a serious one. It was learnt that sacrifices were made in different shrines in the Kingdom prior to the palace event with a view to ensure that any one involved in human trafficking in any part of the state would be caught like a chicken, a top Benin Chief told Saturday Vanguard.

Meanwhile, the Zonal Commander, National Agency for the Prohibition of Trafficking in Persons, NAPTIP, Mr Nduka Nwanwennee described the Oba’s intervention as a significant milestone in the war against human trafficking and illegal migration. According to him, “before now, victims of human trafficking rarely opened up to give evidence in court because of the oath they have taken. They are afraid and believe that the oath will have effect on them as the native doctors who administered such oaths have their personal items like fingernails, pubic hair, menstrual pads, pants, photographs etc. “Now that those oaths have been nullified by the monarch, our power of prosecution has been enhanced and we can now rescue more victims,” he said. 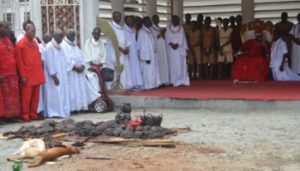 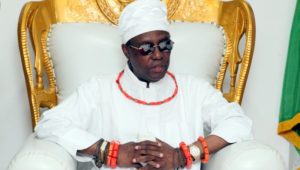